Power: Power-switching. His companion is unknown, but he has a separate consciousness which possesses his personality and knowledge. The consciousness can take one form; that of a serval. It refers to itself as a ‘temporary jailer,’ rather than a companion.  Zeta’s powers are:

His first power allows him to generate and control fire, as well as granting him immunity to extreme temperature. His maximum temperature is slightly over the average of type 5 (Ki-based) fire, at 1,250ºC (2,282ºF).  His second allows him to generate immense amounts of power within his body, and let it out in the form of lightning. Though one of his more powerful offensive abilities, it’s limited by the danger of overflow.  His recorded maximum is approximately 90 million volts. His flight generates a insular layer around him at high speeds and altitudes.  His max flight speed is 350 m/s.  His regeneration is unusually strong for a Power-switcher, and he can heal from anything that doesn’t kill him.  While on the ground, his super speed has not been timed.  It does not give a great stamina boost, so his fifth power is mainly useful for basic combat.  It grants enhanced reflexes and movement speed to an extent that his body would be a blur to a normal human.

Origin: Seen in Chapter I

Notes:  Zeta is an entirely combat oriented metahuman.  Though extremely intelligent, he uses it only for combat.  He is able to spot weakness and patterns, and quickly learns and adapts to the tactics of enemies.  His powers complement that.  He is the leader of his by default of being the first fighting metahuman in his state, but he adopts a more field commander role.  He delegates most of the office and PR work to teammates Exile (2118) and Apollo (1890).  He is given moderate access to confidential information, despite his High Turning Chance rating.  He is considered unlikely to sell information, or give it to anyone.  He has proven mostly resistant to weak to average psychics.  His abnormally strong psyche is believed to result from anger issues of unknown origin.  He has not cooperated with any therapists, each reporting a completely normal and balanced individual, except for one.  That one, Dr. Frank Barr, is lent credence due to his exceptional telepathy.  His unofficial summary is as follows:

“Zeta is incapable of allowing himself to trust anyone, though the reasons, if they exist, are buried very deep.  He seems to simultaneously have self-esteem issues and an incredibly large ego.  Despite his trust issues, he values the people around him.  He has no concept of good or evil, and he views things in terms of what is acceptable by society.  He believes in a Darwinian survival and rule of the fittest ideal, and this drives him to seek personal power.  It could be classified as an unhealthy obsession.  He spends most of his time either working out, training, playing video games, or reading.  He rarely sleeps a full night.  His biggest issue is indubitably his anger.  It seems to be his strongest emotion, and he uses it to pump himself up for a fight, and conquer his own fear and shame.  The most disturbing thing is that he takes a twisted pride in it.  He probably connects his anger to his power, linking it to his power obsession.  He is capable of forming relationships with allies and co workers, but usually temporary.  His close friends think of him as having a nice side and an angry side.  They have noticed that the ‘nice side’ has appeared less and less.  He scored highly on the Hare Checklist, but I do not believe he is a sociopath, though he may believe himself to be one.  He has demonstrated compassion and genuine sadness at times.  His rough demeanor may be attributed to his belief in his inability to feel those emotions, or that he believes them to be a sign of weakness.  He seems to be developing an increasingly violent and isolated personality.  His companion exerts a considerable amount of influence over him and his social life, but I have not been able to discern the extent of it.”

In the case that he does turn, lock down the facility and avoid contact.  He is capable of incredible brutality, even to the people he appears to care about.  He has killed villains before, and though he does not go out of his way to kill, he will deal with anyone in his path as he feels right.  He is very capable, and has no compunctions.  He seems to find comfort in solitude, but enjoys the company of others.  If he turns, he is expected to find a small, tight knit group of anti-societal, successful, and powerful members.  He does not appear to relish command or control, though receiving strict order grates on him. 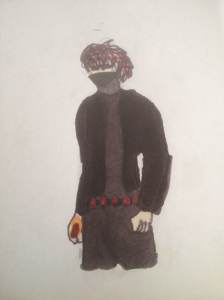 Oh, look! I’m back, meaning that this is another our-writers-screwed-up post. Flurry to the Rescue! We were stressing for hours last night because SOMEONE *cough cough* Discharge *cough* wasn’t answering us on facebook or replying to our texts, and we needed him to post. I get that there’s school and all, but I do the same sports as Discharge, have musical instrument lessons like Discharge, and I have annoying teachers who give tons of homework too. There’s always SOME free time to write, right? Anyways, sorry we don’t have a new section, BUT… The Mirage post has been updated. Don’t kill us.

Leave a Reply, or Legion will hunt you down and fart in your general direction Cancel reply